Aaye hai ye aapki zindagi mein phir se ek baar confusion lekar. Huh? Kaunsa confusion, boss? Arey vahi jo barson se chalta aa raha hai. Kaun hai Shoosha ke daddy? Is there ever going to be an end to this? Well, we guess not! ALTBalaji is all set to take you into the hilarious life of a youngster, Shoosha who wants nothing but his father. Setting aside flashbacks from the first season, he is here with a brand-new story in Who’s Your Daddy Season 2.

Ever since ALTBalaji dropped the trailer of Who’s Your Daddy Season 2 web series, everyone seems to be talking only about one thing- Kaun hai Shoosha ke pita? Uff! While we won’t be able to spill the tea at the moment, why don’t we tell you why you cannot give Who’s Your Daddy 2 a miss? Come, let’s find that out: 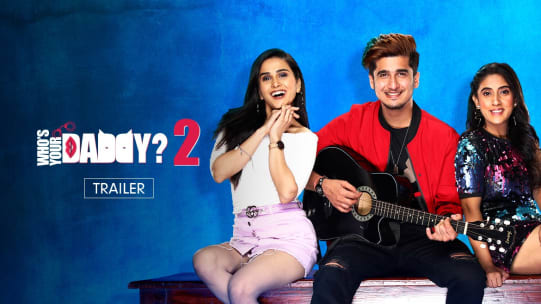 If you thought the first season of Who’s Your Daddy was the funniest one, you were wrong. Who’s Your Daddy 2 is hands down going to be legendary. The funny one-liners and the hilarious scenarios in the show are something that you should watch out for. Trust us, Who’s Your Daddy Season 2 is packed with masala, mirch, omph, aur dher sari masti.

While the first season of Who’s Your Daddy took you back in the flashback, the brand-new season will revolve around the present scenarios and circumstances. Despite this, ek chiz tay hai iss baar bhi confusion hai. The show is ready to roll with lots and lots of confusion. In fact, it is going to be fun. We can bet on that!

It is no secret that everyone loves funny one-liners and punchy dialogues. If you enjoy them too, ALTBalaji’s Who’s Your Daddy Season 2 is going to win your heart with its quirky dialogues. Don’t miss out the chance to ROFL due to the comic timing of the show. Kyunki iss baar punch line kaafi maska maar ke hai!

Moving far ahead from the first season, Who’s Your Daddy Season 2 is set to strike the right chords once again. Hold your horses a little longer. The laughter riot will take the digital world by storm on 22nd December. So, get started with an affordable subscription package today! Watch out for Paurashpur, Crashh releasing soon on ALTBalaji.